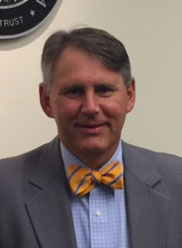 Judge James H. Daniel is currently serving as a Circuit Judge in the Fourth Judicial Circuit in Nassau County, Florida where he is the administrative judge for the county.  In addition to his administrative duties, he oversees the felony criminal docket, all dependency cases, one-half of the county’s family law case load, probate and guardianship petitions, and domestic violence injunctions.  He was elected without opposition to the bench in May of 2008 and began his first term in January 2009.  He was re-elected without opposition for a second term in 2014.  From 2009 until January of 2019, he served as a circuit judge in Duval County where he rotated through assignments in felony, circuit civil, and juvenile divisions.

Judge Daniel is a “double Gator” as he obtained his undergraduate and law degrees from The University of Florida.  He graduated from law school in 1992 and immediately went into private practice in Jacksonville.  From 1995 through 2008, he was an associate and, later, partner at the law firm that eventually became Coker, Schickel, Sorenson & Daniel, P.A.  There, he handled a variety of civil cases at both the trial and appellate level with a focus on personal injury, insurance and construction claims.  In June of 2007, he was Board Certified by the Florida Bar in the area of appellate practice and has maintained his Board Certification ever since.